The main attraction for this evening was Burrata, which means “buttered” in Italian.  How appropriate for this decadent cheese.

At first glance it simply looks like a freshly formed “bundle” of mozzarella, which in fact it is.  But there’s more there than meets the eye.  Once you slice into the glistening, alabaster ball, the cream along with more bits of mozzarella flows out.  The flavor is of a mild, fresh, milky cheese.  Heavenly.

In the frenzy of cooking, I did not get a chance to take a photo of my burrata after I unwrapped it, so take a look at the photo from Wikipedia above.

Who can resist that? 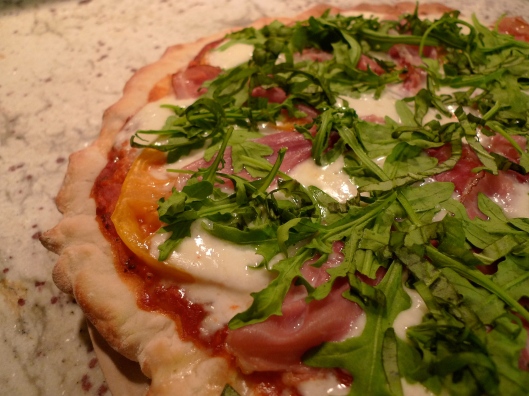 Along with the buttery burrata, I bought a gorgeous yellow heirloom tomato which added a little sweetness.  Thinly sliced prosciutto was the perfect addition as the savory element.  Then, finally, fresh rocket leaves (arugula) and basil for the finishing touch.

With this pizza, you must bake the crust all the way through, then add the ingredients in phases.  When the crust is nice and firm, apply the sauce and sliced tomato to bake for a few minutes.  Next, I added the burrata in small dollops along with the prosciutto.  They all return to the oven until melted, then the greens go on at the very end for just a minute.

It’s not one of our most innovative pizza, but it certainly was one of our tastiest!

I’m finally caught up on my posts from my time in Germany!

I’ve been back in my home in San Francisco for a couple of weeks now.  I’m settling in, getting over a cough and, of course, doing my best to eat my way through all of my favorite foods that I miss while I’m in Marbella.

San Francisco summers are wickedly cruel to those unfamiliar.  Poor tourists show up in their summer wear, only to find that it’s not quite summer here!  Sure, we get glimpses of sun, but in June/July, the temperature remains in the 60’s and the dampness of the fog penetrates right to your bones.  So, a quick tip from a local, if you visit SF during the months of June and July, bring layers.

Having said that, yesterday was actually partly sunny.  I’d rather see the cup half full, so that sounds better than partly cloudy, right?  Bf and I enjoyed our Sunday afternoon in North Beach.  North Beach is also known as “Little Italy”.  The neighborhood was bustling with people and I was happy to be feeling well enough to have a Sunday Funday!

We started with a drink at restaurant Original Joe’s.  It was cocktail hour and I was craving something classic.  I thought it was fitting to order a whiskey sour in such an establishment.  It was super tasty.

This is a new location for the restaurant since the original Downtown/Tenderloin restaurant was devastated by a fire 4 years ago.  It was a long hiatus, but worth the wait.  In my opinion, this reincarnation is handsome and a more fitting location for this classic Italian-American San Francisco original.

Then we moved across the street to Tony’s Pizza Napoletana.  Why mix drinks, so I ordered another whiskey sour, though this time, blended.  Another hit.  At this point, I was feeling anything but sour. 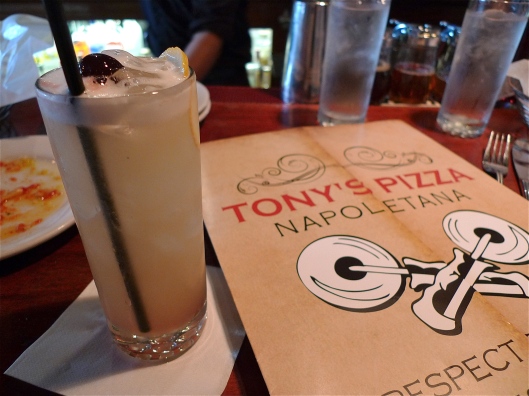 In 2007, Tony Gemingnani was the first American ever to win the title of World Champion Pizza Maker at the World Pizza Cup in Naples for his Margherita Pizza.  He’s also a ten-time World Champion Pizza Acrobat.  I remember catching a show of him throwing dough on the Food Network.  Incredible.  You can find all this and more on his restaurant link above because now it’s time for the eye candy.

We started with the Meatball Gigante with Sea Salted Burrata.  Let me say that this is food for the Gods.  Their sauce is PHENOMENAL.  I could bathe in this stuff.

I usually prefer eating at the bar at Tony’s.  It adds to the experience.  For example, we met a fun local, Steve, that sat next to me.  He was clearly a regular and as enthusiastic about Tony’s as I am.  Steve was nice enough to let me take a photo of his Pizza Margherita – the world cup winning pizza.  They are limited to serving 73 of these pizzas per day due to the fact that this is exactly how much dough is “hand-mixed with san felice flour then proofed in napoletana wood boxes” for each day.  I have eaten it many times and this Margherita is fabulous.  Simplicity at its best.

Our choice on this day was the pizza Diavola Con Rucola – hot red pepper oil, sopressata picante, arugula, mozzarella and parmigiano.  With this pizza, it was all about the crust. Thin, yet still had some chew.  It is spicy, but not enough to overpower or take away from the flavor of all of the ingredients.

Tony’s remains on my top 10 restaurants that I miss while away and, quite frankly, it is just as much about the experience as it is about the fantastic food!

Let Me ”Feed” You